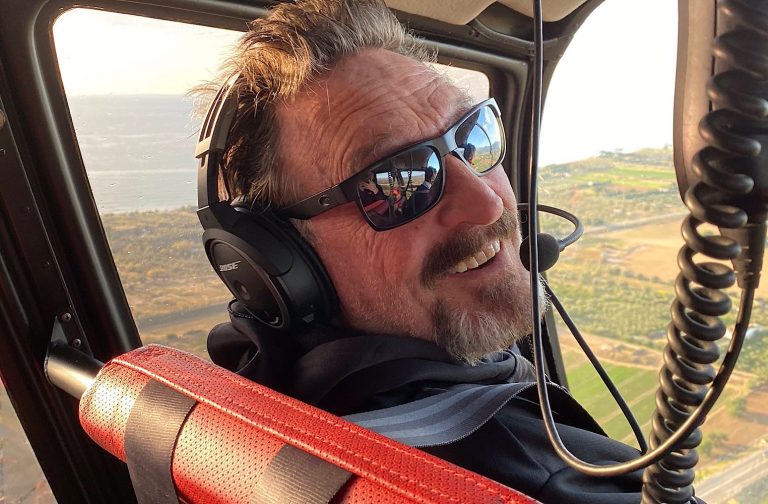 When it comes to causing sensation in the crypto space, there are few figures like 2020 Libertarian presidential candidate John McAfee. The controversial crypto champion took time out with news.Bitcoin.com to discuss his presidential campaign, the clampdown of regulators on crypto, and even the futility of BTC maximalism. Not to mention his spin on the popular ‘Epstein didn’t kill himself’ meme.

Also Read: McAfee Envisions DEX in a World Where Crypto Won’t Be Traded for Fiat

Asked about the recent FBI arrest of Ethereum Foundation member Virgil Griffith, and the climate of the crypto world in general, rogue politician and freedom advocate John McAfee is at no loss for words.

“You know, we’ve turned into a surveillance police state in America, where anything that threatens what the FBI or the CIA determines is national security — it can be defined as anything now,” he remarks. “For example, the FBI is defining ‘extremist groups,’ and they’re giving an example of people who believe that the United States government would lie and use devious practices.”

“Seriously it’s gone crazy. My heart goes out to the man [Griffith], I mean he did no less than me when I was in Cuba and offered to assist in blockchain to get around U.S. sanctions.”

Regarding the perceived descent of America into totalitarianism, McAfee notes that it’s been going on for some time, but that an acceleration is happening. He cites the U.S. constitution. “The interpretation of the constitution has gone insane. I mean, in the constitution we have certain rights — the right to public assembly, for example — that’s a right, not a privilege,” he then elaborates:

And yet, try going to any city in America. A couple hundred people. Assemble in the park and you know, do a thing. They’re gonna come and say ‘where’s your permit?’ Permit? If you have to have permission to exercise a right, then it’s not a right, people. It’s a privilege.

The cyber security expert then reiterates that the privileged class controls this paradigm and relies on methods of funding that are unconstitutional and illegal. He tells news.Bitcoin.com that America was the “industrial power of the world” even prior to the institution of the income tax in 1913.

“That’s why the government is now after me. I mean I haven’t paid taxes for 10 years, eight of which the government ignored me. I’ve already paid over $50 million in taxes in my lifetime. I have not received $50 million in services. If anything I should be the one asking for a f*cking refund.” McAfee continues:

Income taxes in my mind and heart, as I see the reality around us, are unconstitutional, illegal, and it pushed us back into a feudal society of over 1,000 years ago. Because what is a feudal society? One in which you belong to the king.

He suggests that other, more voluntary methods of taxation are too troublesome for the state, and would require effort on the government’s part. The lazy solution is simply to make everyone a slave to the king via income tax, forced to do the reporting themselves. A tax which is increasingly spent on draconian spying and surveillance.

“90% of all the surveillance budget for all the covert programs goes to watching … American citizens,” McAfee details. “This is where we’re spending our money. We are paying to watch ourself. We are paying to suspect ourself as being the enemy.” He remarks sardonically:

“We don’t trust you people. You might be a terrorist. You might be some insidious sub-human with an idea that will throw a monkey wrench into our perfect system of graft, bribery and corruption.” McAfee has himself stated he’s not running to win the United States presidency. “If anybody believes I can win, stop taking the drugs, or get back on your medications, I’m not sure which … However, it doesn’t really matter who gets the presidency in my mind.” When news.Bitcoin.com asked what role crypto and cyber security play in his campaign, he stated:

The only reason I am campaigning is because of crypto. I think that the blockchain and privacy coins and distributed exchanges have the ability to free people from government control if people have the courage to do the right thing.

The right thing, as the rebel septuagenarian soon clarifies, is non-compliance. “When countries begin, or when nations begin creating their own cryptocurrencies like China, or companies like Facebook, those aren’t true cryptocurrencies. Those are crypto surveillance systems that allow governments and corporations to monitor every penny that you spend. And if we know that, and go well, f*ck me then I’m not gonna use them. Even if the government says you must use the crypto dollar, just say F you.”

“You can use a privacy coin like Monero and a distributed exchange, and then suddenly governments know nothing about your finances — how much you made, how much you spend — and therefore have to rely on your word for what you made and what you spend, with no way to audit that word. Now what do you think people are gonna do?”

Regarding his recently launched decentralized exchange, McAfee DEX, McAfee emphasizes: “I take no KYC, I don’t take any information from customers. No name, no email address, nothing. We hold no money, we hold no tokens. We’re just a hole between you and the blockchain and that hole makes it all look nice and neat. That’s what our portal does.”

“Our logic is on the blockchains, so it can’t be removed. If the SEC does catch up with me, my only word will be: ‘God, I’m sorry I wasn’t thinking, I didn’t know. But unfortunately it’s done now and I can’t change it. I can’t stop it.’ We charge nothing for listing a coin … we don’t charge maker fees. One quarter of one percent taker fees. That’s barely — even if we’re hot and everybody uses us — barely going to cover our development costs.” McAfee reiterates:

And yet, somebody had to do it, because if we don’t have exchanges like this then we’re dead in the water, people … You try shutting down a distributed, decentralized exchange — which mine is — it cannot be done. Technically, politically, legally, it can’t ever be taken down, and that’s my gift. Whackd Coin and the Epstein Meme

McAfee chuckles heartily at the mention of his new WHACKD token, a crypto created to raise awareness about the suspicious death of convicted sex offender and billionaire financier Jeffrey Epstein. The maverick politician has also recently gotten the name of the coin tattooed on his arm, in case he is suicided by political powers. “Well, the tattoo is not a joke, I’ve got the tattoo here,” he reassures, “but the coin is a joke.”

“The fact that the government is even attempting to maintain the deception that [Epstein] hung himself is shocking. It is so obvious a man, six-foot-one, hanging himself from a five-foot-seven-inch bunk … You’re certainly not going to break your neck that way. ”

The coin, which McAfee hopes will help to unravel the already tenuous official government story, features a 10% burn every transaction (it’s “whacked”) and one in every 1,000 transactions is completely destroyed. “I made this coin … Just to keep it going,” he details. “If we push this, this will unwind something extremely important that we need to see. We need to see the truth of what happens behind that f*cking curtain … nobody believes he committed suicide.” On Crypto Tribalism, Centralized Exchanges, and the Gift of Fire

McAfee says he’s got time for one more question and then he’s got to go. Asked about BTC maximalism and tribalist noise in the space, he relates that while he’s got nothing against Bitcoin (“I’m not dissing bitcoin at all. Who talks it up more than me?”), he does note weaknesses:

“Let us all get real, bitcoin maximalists … as a currency it is an ancient, creaky, impossible f*cking technology that has no privacy. That has no smart contracts.” McAfee goes on to imagine a bank behaving as the bitcoin blockchain, with account information publicly available to anyone who asks.

Non-KYC/AML, peer-to-peer platforms do exist, and enable private trading of cryptos forked from the BTC chain, like Bitcoin Cash, however, and the BCH blockchain is home to many privacy-focused developments and innovations. Still, the author concurs: mere hodling or trading of BTC on centralized exchanges is no revolution. As McAfee emphasizes again, “That’s bitcoin, people. You know you will never f*cking use it if you have an alternative, and you have 11,000 f*cking alternatives now. The altcoin world.” He says that 95% of transactions are happening outside of centralized channels, for things like drugs, houses, bulletproof vests, pizza and shoelaces. He points to DAI, Monero, and Ethereum. He drives his point home: “You’ve gotta have control. That frees you … Free yourself first, then make your f*cking money. But stop this nonsense of trying to flip from this to that, waiting for the market to go up, day trading.”

You’re killing us, people. If you have those coins, buy something with it … Nothing you can’t buy with crypto if you search … You are wasting away the greatest gift that humanity has been given since fire.

What do you think of McAfee’s thoughts on crypto and freedom? Let us know in the comments section below.

The post John McAfee Weighs in on Maximalism, Epstein’s Death, and ‘the Greatest Gift Since Fire’ appeared first on Bitcoin News.

Post source: John McAfee Weighs in on Maximalism, Epstein’s Death, and ‘the Greatest Gift Since Fire’

January 15, 2020
India’s supreme courtroom spent all day listening to arguments in opposition to the crypto banking ban by the Reserve Bank of India (RBI) on...