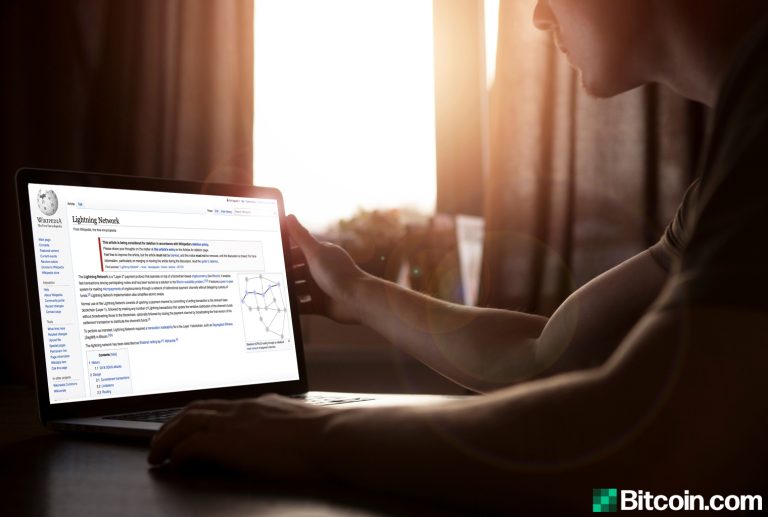 A slew of Wikipedia editors would like to delete the Lightning Network (LN) Wiki page because the subject matter does not hold notability. Wikipedia editors use notability as a test to find out if a topic warrants its own article. The LN article debate on Wikipedia is still raging as a few editors believe the subject is “dredging for mainstream press coverage” while highlighting that the article does not have reliable third-party sources.

The controversial LN scaling solution for BTC is being discussed on Wikipedia because a group of Wiki editors would like to delete the Lightning Network article for lack of notability. The discussion among Wikipedia contributors shows there’s a disagreement about the validity of the LN article. “There is a problem with notability of the subject: the citations in the article refers to self-published texts that are not acceptable for notability,” explains the editor Ladislav Mecir. “Other sources found also do not qualify as significant coverage by sources independent on the subject,” Mecir added. A few people came to the LN article’s defense and said that they think that the LN page “is sufficiently notable for WP.” “It’s fair to say that it’s one of the most important initiatives in the Bitcoin ecosystem and seems to be the only viable path for Bitcoin,” Wiki contributor ‘Jimd’ wrote.

Another editor who wants to pull the entire subject from Wikipedia said he finds it difficult to take any press coverage of the LN project seriously. He further said that the ‘Bob and Carol’ explanation within the article is a better example but “still laughable.” “I’d prefer to get rid of the whole lot — Ultimately it looks like many people are having the wool pulled over their eyes by a few crooks who claim the impossible — There’s no reason for Wikipedia to get involved at all.”

Another contributor said that the subject may be best suited for a broader article on consensus-less decentralized payment systems. The editor further added that the LN project would be near the bottom of the list as the project is not “Bitcoin-specific but could be used with a multitude of systems.” During the LN article deletion debate, an editor named ‘Jtbobwaysf’ said that [Wikipedia] doesn’t “remove old dead subjects.” “They are useful from a historic perspective — Also think your suggestion of a broader article would be nice, maybe we can do that when there are some other similar networks on Ethereum, etc.,” Jtbobwaysf wrote. “Or maybe they will later all be referred to as Lightning if that becomes the common name.” Greg Maxwell: ‘LN Article Has a Fringe Chance of Removal’

After this comment, Bitcoin Core and Blockstream developer Greg Maxwell stepped into the conversation. Maxwell is well known for contributing to Wikipedia but some Wiki contributors have called him an editor who “regularly makes personal attacks.” Maxwell believes the LN article should be kept and told Jtbobwaysf that “Lightning is very much not dead.”

“My only point there was that effort debating the boundary of cryptocurrency notability would be better spent on things that weren’t close to obvious keeps,” Maxwell remarked.

The debate continued with a few more editors throwing in their two cents about the LN article on Wikipedia. It seems a good portion of the contributors believe the sources used in the article were not up to standards. Throughout most of the commentary, there were issues about the validity of sourced content. Besides the source problem, an editor named ‘Kjerish’ believes that the LN subject “has enough notability as a data structure alone.” “The subject potentially applies to several chains (not just Bitcoin),” the editor added. After the news spread about Wikipedia editors discussing deleting the LN page, a few crypto influencers spoke about the subject on social media.

“Go ahead, delete it,” tweeted Casa CTO Jameson Lopp. “The Wikipedia page for Bitcoin was deleted in July of 2010 and it wasn’t a big deal — It ended up being restored 6 months later.” When someone posted about the subject on r/bitcoin, Greg Maxwell told the creator of the thread not to “spam this sort of thing” on the Reddit forum. “Wikipedia is exceptionally unlikely to remove this article, and in the fringe chance it were removed it would only be merged into some bigger article,” Maxwell stressed. Instead of discussing the subject further the Redditor said: “All right, deleted the post.”

US Military Under Serious Threat From Deadly Malware

When a Tesla Car Becomes a Bitcoin Node…