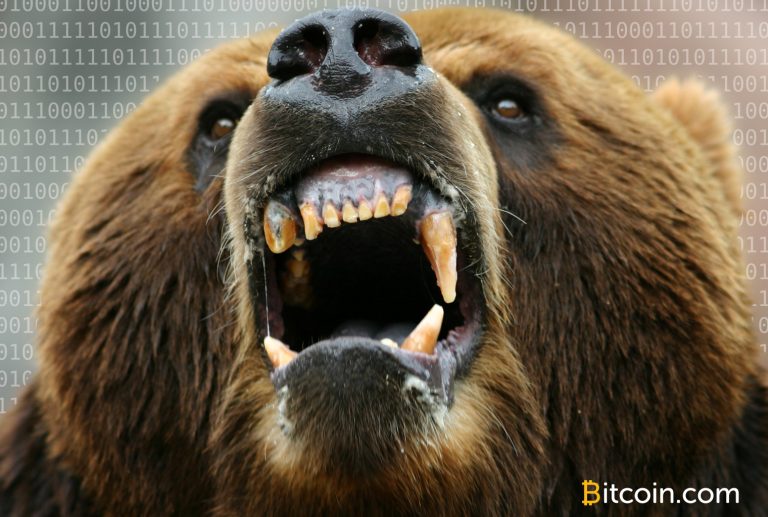 Digital asset markets fell hard during the early morning trading sessions on May 17 as the price of bitcoin core (BTC) quickly tumbled from $7,900 to a low of $6,200 on Bitstamp. Many other crypto markets followed BTC’s drop in value, but over the last few hours, a good portion of coins have regained a percentage of the intraday losses.

Markets faced extreme volatility on May 17, as the price of many coins nosedived in value from the previous day’s high. Currently, the entire market capitalization of the whole cryptoconomy is roughly $226 billion, but close to $30 billion was shaved off the overall valuation since the dump. At the moment, on Friday afternoon, the price of bitcoin core (BTC) is roughly $7,085 and is down 10.9% in the last 24 hours. The second largest market valuation belongs to ethereum (ETH) markets which are currently down more than 13.6% today. Each ETH is swapping for $229 per coin and the market capitalization is roughly $24.3 billion. Ripple (XRP) prices are down 12.6% and each XRP is swapping for $0.36. Lastly, eos (EOS) holds the fifth largest market cap today, after knocking litecoin (LTC) out of the position. One eos is trading for $5.83 per coin and the market is down 10.9%.

The fourth highest valued market cap on May 17 is bitcoin cash (BCH) which has lost 14.7% since the initial dip. At press time, one BCH is trading for $347 but BCH is still up 20% over the last seven days. BCH has around $3.6 billion in global trades and a market cap of about $6.1 billion on Friday.

The top five exchanges swapping the most BCH today include Coinbene, Binance, Huobi Pro, Bitmart, and Bitforex. The top currency pair traded with BCH this Friday is tether (USDT) which captures 44.9% of today’s trades. This is followed by BTC (28.4%), USD (12.5%), KRW (7.8%) and the EUR (1.9%). Both ETH/BCH and JPY/BCH are also capturing close to 2% of the day’s global trade volume. Bitcoin cash is the sixth most traded coin by volume below eos and above ripple.

Right now, looking at the 4-hour BCH/USD chart on Kraken shows the bears are struggling to break lower ground as there are strong foundations at the current $354 price point. The two Simple Moving Averages are growing closer with the 100 SMA, nearing the long term 200 SMA. This could indicate a trend reversal is in the cards but the Relative Strength Index (RSI 43.94) shows the dip hasn’t moved into oversold regions.

The flash crash that affected all markets didn’t last long and the BCH MACd levels show things may go lower in the near future while the Stochastic oscillator is impartial at press time. Most technical indicators show a sell signal or some level of uncertainty which means another correction is likely on the horizon. If bulls manage to overcome the pressure, then they need to surpass prior heights again through the $375 and $400 range. On the backside, there’s some decent foundational support that’s been holding strong at the $340 zone and some more foundations around the $315 and the $295 range.

The Verdict: Crypto Sentiment Changed Fast Like a Mood Ring

At the moment, a decent amount of uncertainty is in the air and traders are likely hoping they played the correct positions. Right now, tether (USDT) has the strongest volume which is about $1 billion dollars higher than BTC’s trade volume today. Crypto markets begined rising pretty fast, about a week before and during the Consensus conference in New York which typically happens on an annual basis. However, during the early morning trading sessions this Friday, traders saw a BTC sell order worth a whopping $35 million on the Luxembourg-based exchange Bitstamp. As soon as the order hit the market, it triggered a very fast nosedive which saw BTC lose $1,000 in value. So far the cryptoconomy is calm but traders are unsettled by the extreme volatility and the mood has certainly changed.

Where do you see the price of bitcoin cash and the rest of the crypto markets heading from here? Let us know what you think about this subject in the comments section below.

Disclaimer: Price articles and markets updates are intended for informational purposes only and should not to be considered as trading advice. Neither Bitcoin.com nor the author is responsible for any losses or gains, as the ultimate decision to conduct a trade is made by the reader. Always remember that only those in possession of the private keys are in control of the “money.”