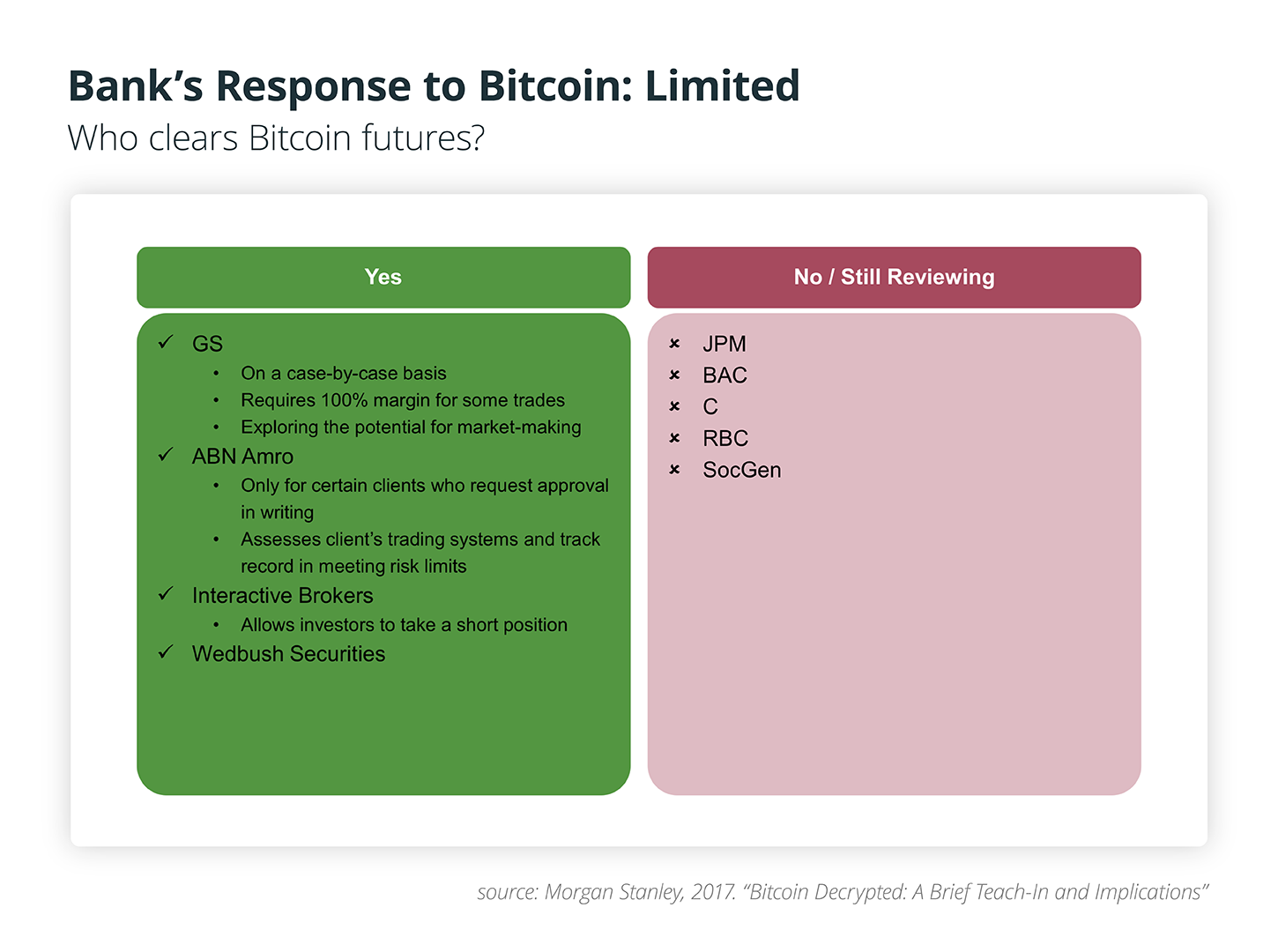 In comparison to Morgan Stanley’s 2017 report on Bitcoin, their 2018 outlook is bullish. The report contains an overview of both how Bitcoin has evolved, and how its investment purpose has changed throughout its existence. Morgan Stanley analysts also touched upon the recent stablecoin trend and both central bank and regulator reactions to Bitcoin for the last six months. The report listed several shortcomings that persist for Bitcoin, such as energy consumption and a lack of a robust regulatory framework. Analysts have revealed about the “surprising” change in funding flowing into the sector, along with an increasing trend for crypto-tied futures.

All eyes on futures

This latest development, described by the bank as “surprising,” comes against the backdrop of Morgan Stanley offering trading in derivatives tied to the largest cryptocurrency. It’s important to note that the bank is not actually planning to trade Bitcoin or cryptocurrencies directly but rather to offer Bitcoin swap trading tied to futures contracts. Earlier this year, CEO James Gorman said that a trading desk specializing in derivatives tied to digital assets could be a potential service offered to clients.

Futures are contracts in which the buyer has agreed to purchase an asset at an agreed time and price in the future. The same arrangement stands for the party selling the asset as well. These contracts note both the quality and quantity of the assets that are being traded, standardized, and either require physical delivery of the asset being traded or are settled in cash.

According to Bloomberg, the bank already has the measures in place to offer Bitcoin swap trading, however, it will not officially launch any initiative without first ascertaining the level of institutional client demand and completing a thorough internal approval process.

As previously reported by Cointelegraph, Morgan Stanley told clients that Bitcoin was similar to the Nasdaq, albeit moving “15x” faster. The bank also predicted that financial markets would increasingly lean towards the use of crypto in the future:

“Over the coming years, we think that the market focus could turn increasingly toward cross trades between cryptocurrencies/tokens, which would transact via distributed ledgers only and not via the banking system.”

In spite of the bank’s apparent readiness to roll out this latest venture, the fact that their list of institutions actually willing to clear Bitcoin futures hasn’t changed since their 2017 report tempers any short-term hope for wider adoption: 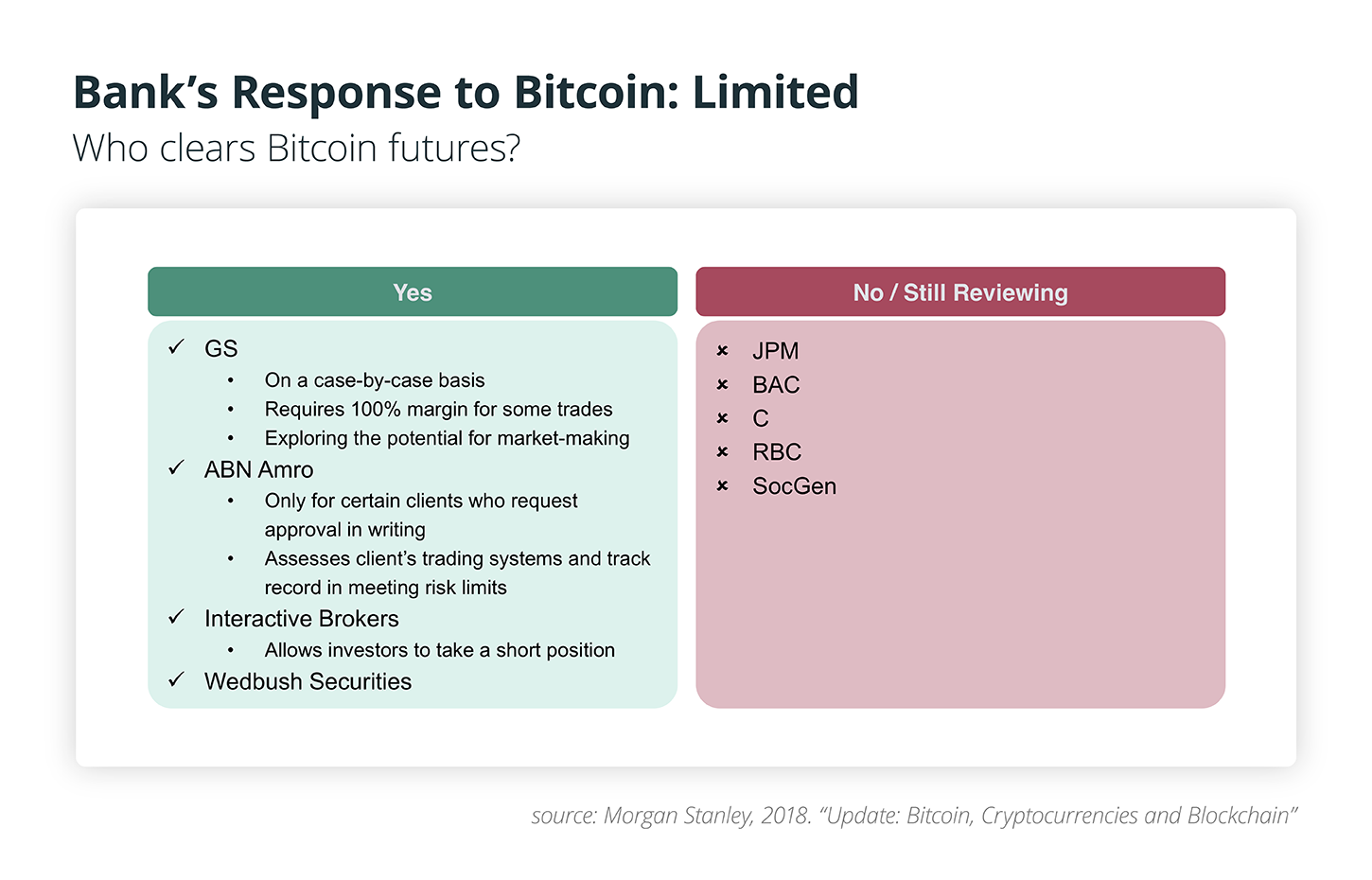 Stablecoin a factor to watch

The report made specific mention of perhaps the most prominent recent development in the cryptocurrency sector: stablecoin. The stablecoin trend began in late 2017 and experienced a burst throughout the summer of 2018, with several industry giants launching stablecoins of their own.

Stablecoins are cryptocurrencies designed to keep volatility to an absolute minimum and are usually valued against either fiat currencies such as the U.S. dollar, commodities, and other crypto assets.

While emphasising that 54 percent of total cryptocurrency value remains Bitcoin, the report notes how the introduction of stablecoins to the crypto market resulted in a share of trading volumes being siphoned away from BTC. Analysts write that this aided the subsequent fall in prices that resulted in the current bear market. 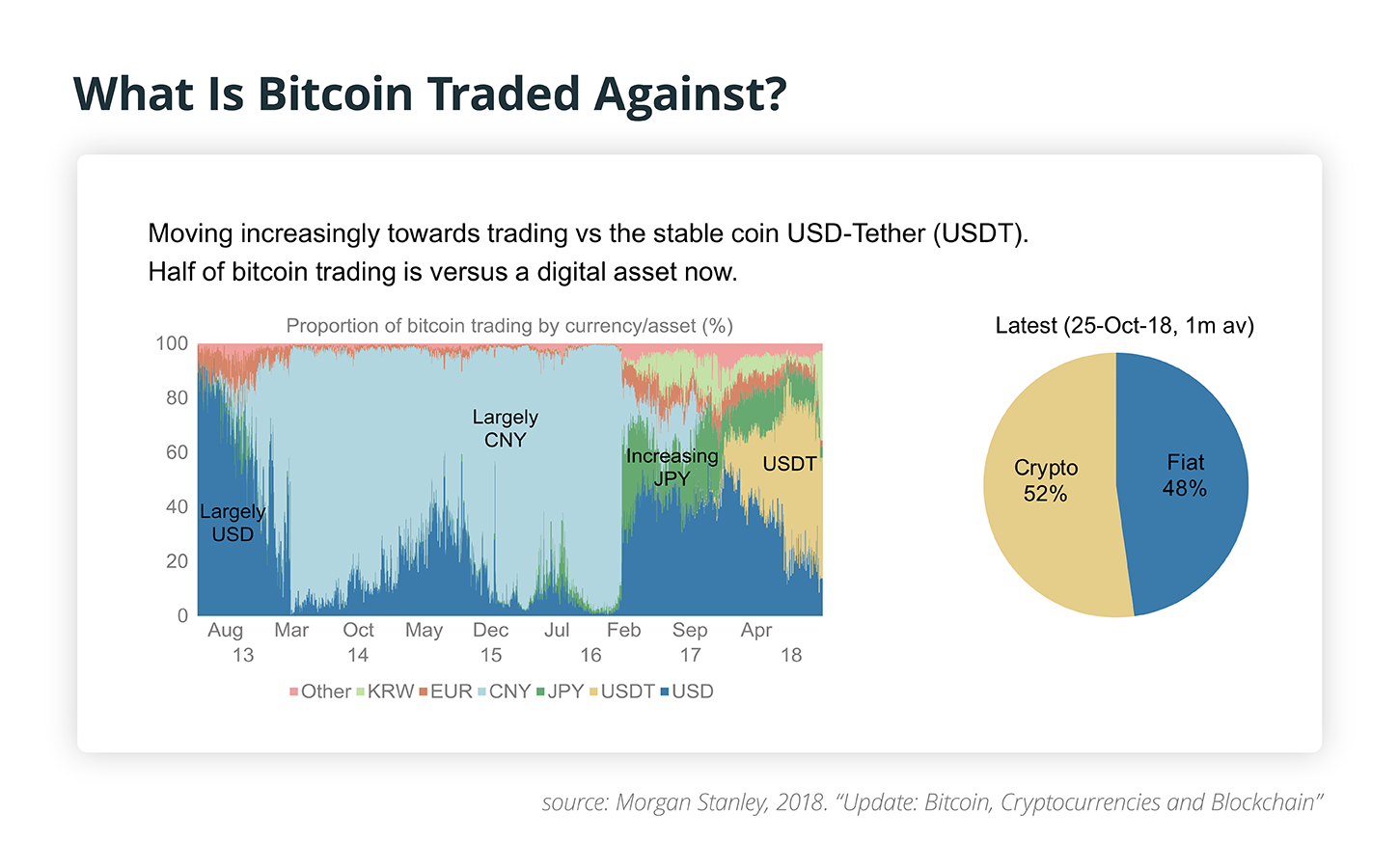 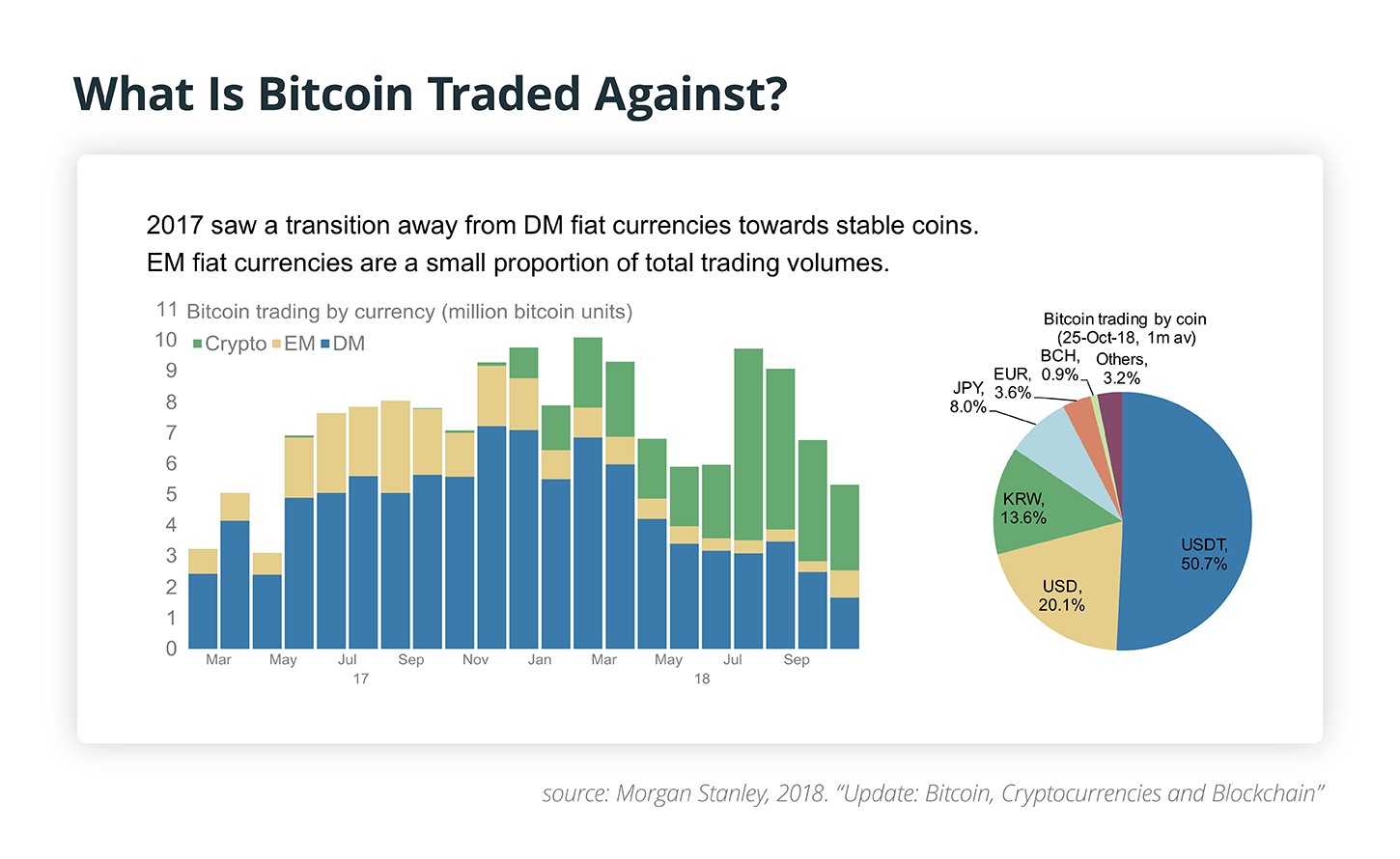 According to the report, these consequences are due to the fact that a large quantity of the existing exchanges do not currently facilitate trading crypto to fiat. The researchers state that this is down to the fact that crypto->fiat trading involves going through the mainstream banking sectors and incurs a higher fee. The report then explains that the resulting slide in Bitcoin prices also had a knock-on effect across the sector, meaning that owners seeking to extricate themselves from Bitcoin holdings needed to find an asset whose valuation more closely reflected the valuation of the U.S. dollar.

Morgan Stanley researchers also emphasize that, in spite of the positive support for the sector’s recent trend, not all stablecoins will survive. The report subsequently postulates that only stablecoins with low transaction costs, high liquidity, and a concrete regulatory structure will be successful in garnering widespread adoption.

While the report does not cast aspersions of the future welfare of any specific stablecoins, it does mention four coins to its readers:

Although Tether was previously one of the most ubiquitous and commonly traded stablecoins, it has recently been embroiled in a series of scandals over its lack of transparency and management of reserves. Tether has since rebounded after finding a new banking partner and is “fully backed” by USD, according to a new statement.

Also receiving mention from the Morgan Stanley report is GUSD, launched in September by billionaire twins and established players in the crypto industry, Tyler and Cameron Winklevoss.

The Gemini dollar (GUSD) is backed by U.S. dollars reserved in a bank located in the United States and is eligible for FDIC “pass-through deposit insurance.” The twins hope for Gemini to revolutionize the stablecoin market by eradicating time delays between 24/7 crypto markets and fiat markets that operate under time restriction.

Centre’s stablecoin, USDC, is the third stablecoin named by the report. Centre, a consortium that includes Bitcoin mining giant Bitmain Technologies Ltd., is set to act as the platform for deposits and any fiat conversions for the new stablecoin. The consortium is a subsidiary of Circle, but, according to Bloomberg, the firm announced plans to transform it into an independent organization.

USDC is begining off with a different approach to compliance than its most prominent competitor, Tether. Part of the agreement for issuers is that they allow certified auditors to monitor and review their USDC reserves.

The fourth stablecoin mentioned in the report is DGX (Digix Gold Coin). DGX is equal to 99.99 percent LBMA approved gold in USD. The corresponding gold is held in Digix’s bank in Singapore.

Another key aspect of the Morgan Stanley report is what it calls crypto’s “rapidly morphing thesis.” The report traces the evolution of Bitcoin from its varying roles of digital cash, a new fundraising mechanism, a method for the store of value, to its most recent incarnation as a “new institutional investment class.” 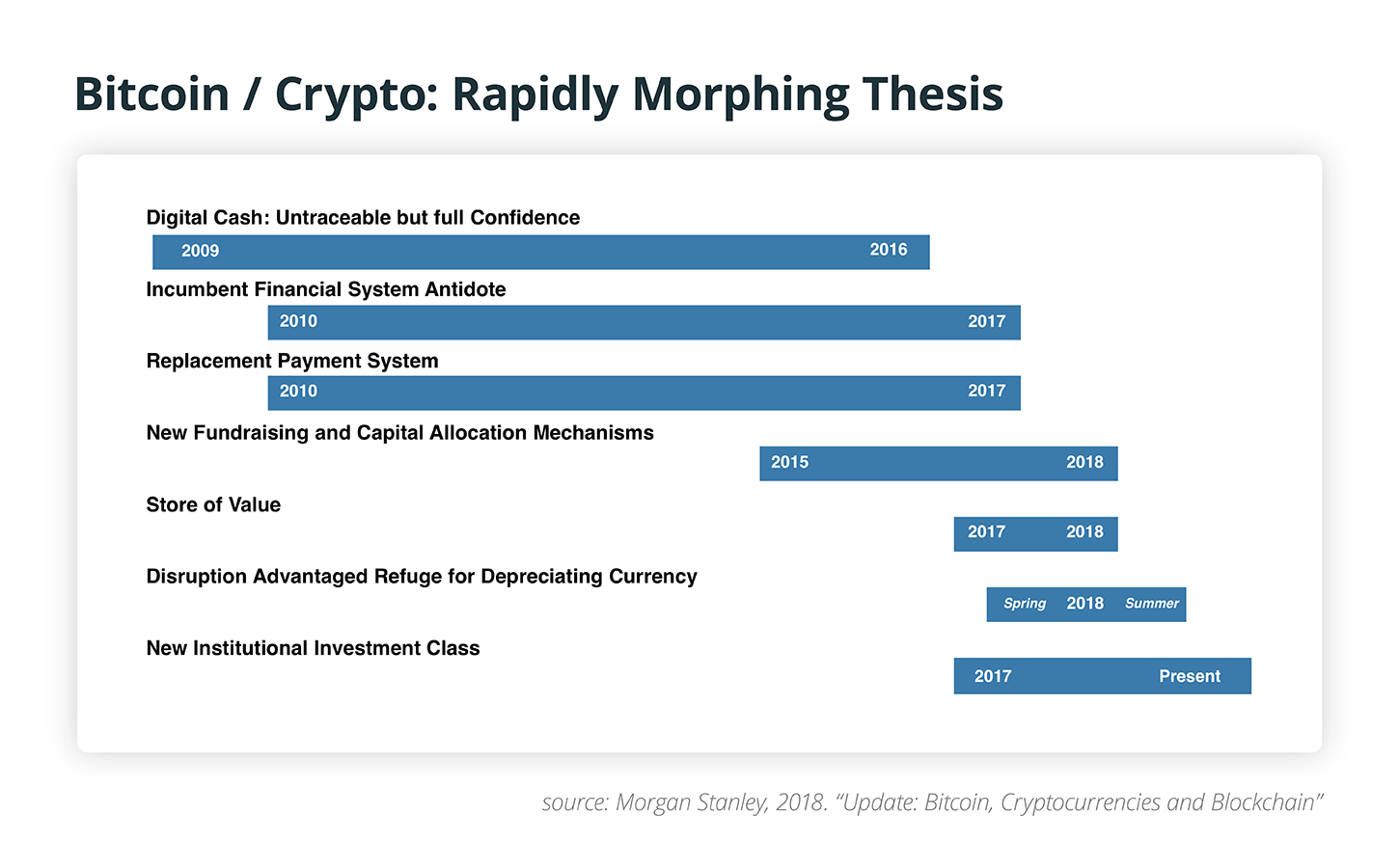 The report showed that 48 percent of funding for Bitcoin came from hedge funds. A further 48 percent came from venture capital with the remaining 3 percent found in the form of private equity.

In terms of the origins of Bitcoin investment, over half has come from U.S. based investors, with China and Hong Kong coming in second at 9 percent and the U.K. – third at 6 percent. 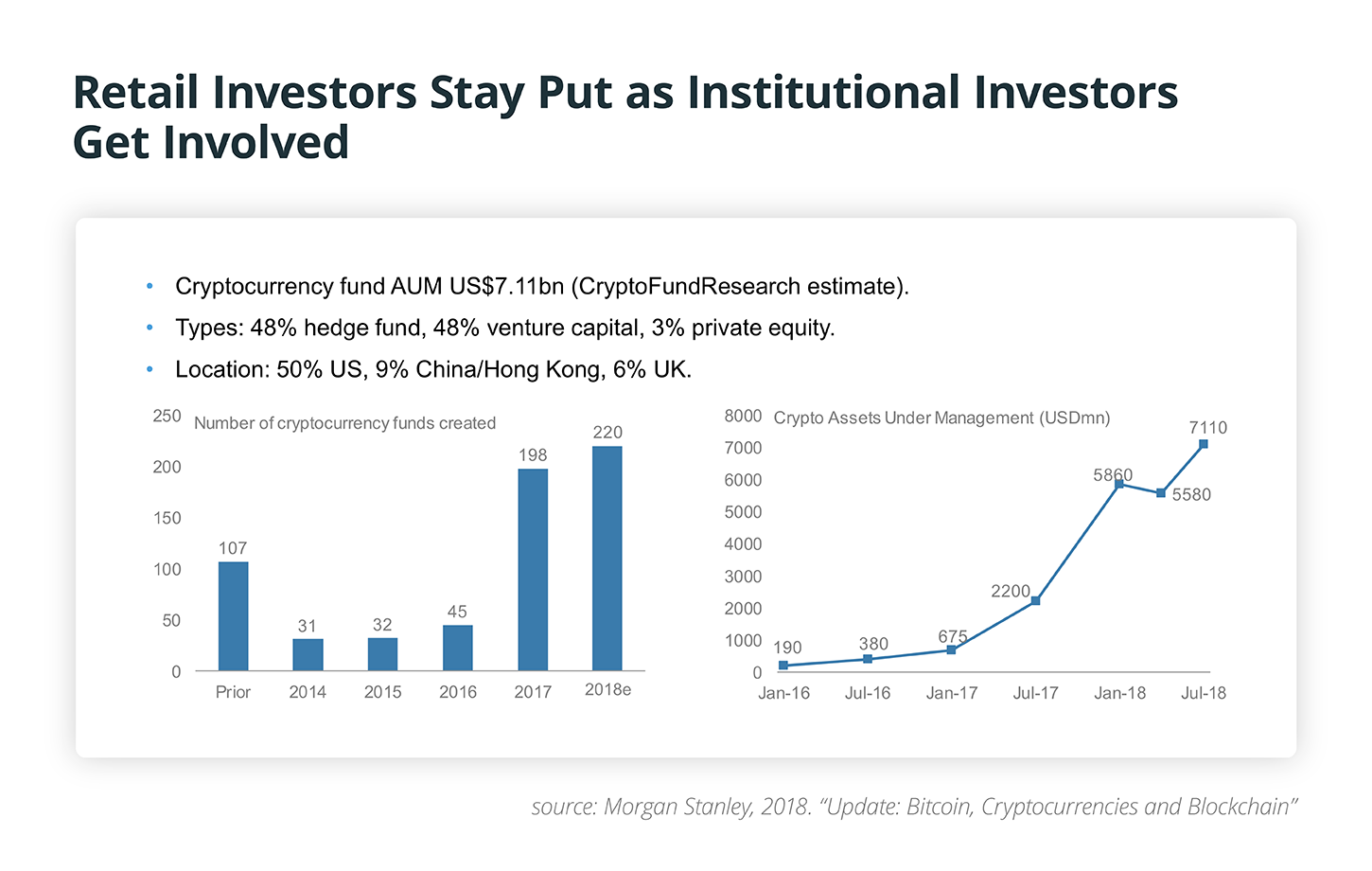 Alongside the financial statistics, the report also emphasizes that big players from the financial mainstream have tossed their hats into the ring. Analysts draw attention to Bain capital’s $15 million Series B funding round for Seed Cx Institutional Trading Platform, Goldman Sachs & Galaxy Digital’s $58.5 million investment in BitGo, as well as Coinbase’s $8 billion valuation, drawing comparisons with Charles Schwab, Fidelity, and Nasdaq.

The report also touches upon the new tendency for crypto players to actively cooperate with institutions, giving the prominent example of the Winklevoss twins’ company, Gemini Trust, hiring Nasdaq to conduct market surveillance.

In spite of the seemingly bullish presentation on institutional involvement, the report goes on to mention that asset managers are still unwilling to take on reputational risks in an underdeveloped regulatory environment. The bank also highlighted the lack of a custodian solution to hold both cryptocurrency and private keys along with that of large financial institutions currently invested.

The report also reveals a change in approach from central banks. According to the Morgan Stanley analysts, the discussion surrounding digital versions of paper notes and coins has reduced, with the exception of Sweden who are yet to decide on the introduction of an e-Krona.

The report documents that the South Korean province of Gyeongbuk is looking to replace city-issued gifts certificates with a digital alternative, along with Thailand’s research into facilitating liquidity and risk management. India’s investigation into the cost efficiency of a digital rupee is also mentioned in the report, but no analysis is given on the progress of these projects nor are any forecasts made on their future success.

Another section of the report is dedicated to comments from regulators. The Morgan Stanley report documents that regulators are still skittish about how best to classify cryptocurrencies, as well as how to fit them into an appropriate framework in which they can be traded safely and legally.

William Hinman, head of the Division of Corporate Finance for the SEC, is quoted in the report, stating that more work needs to be done on establishing client expectations and classifying cryptocurrencies:

Chairman of CFTC, Christopher Giancarlo, was also documented by Morgan Stanley as being bullish about cryptocurrencies and their potential to become a concrete part of the financial mainstream:

“I personally think that cryptocurrencies are here to stay. I think there is a future for them. I’m not sure they ever come to rival the dollar or other hard currencies, but there’s a whole section of the world that really is hungry for functioning currencies that they can’t find in their local currencies. There’s 140 countries in the world, every one of them has a currency. Probably two-thirds are not worth the polymer or the paper they’re written on, and those parts of the world rely on hard currencies. Bitcoin [or another] cryptocurrency may solve some of the problems.”

In light of the fact that Morgan Stanley has been using blockchain-based technology to carry out process transactions and to back up records since March 2016, it might not come as a surprise that the bank listed several benefits that it believes the technology is capable of bringing to the table.

According to the report, blockchain is best implemented for B2B transactions in which the participants on both sides of the transaction are trusted. The bank also documents that blockchain technology provides benefits for cross border payments, a technique increasingly used by migrant workers to send money back to their home countries as remittances. Researchers also noted that there are potential benefits in KYC and client data handling sectors, though they also mentioned that APIs may well be more efficient.

The report provides a list of the many financial institutions that are actively trialling or implementing blockchain technology: 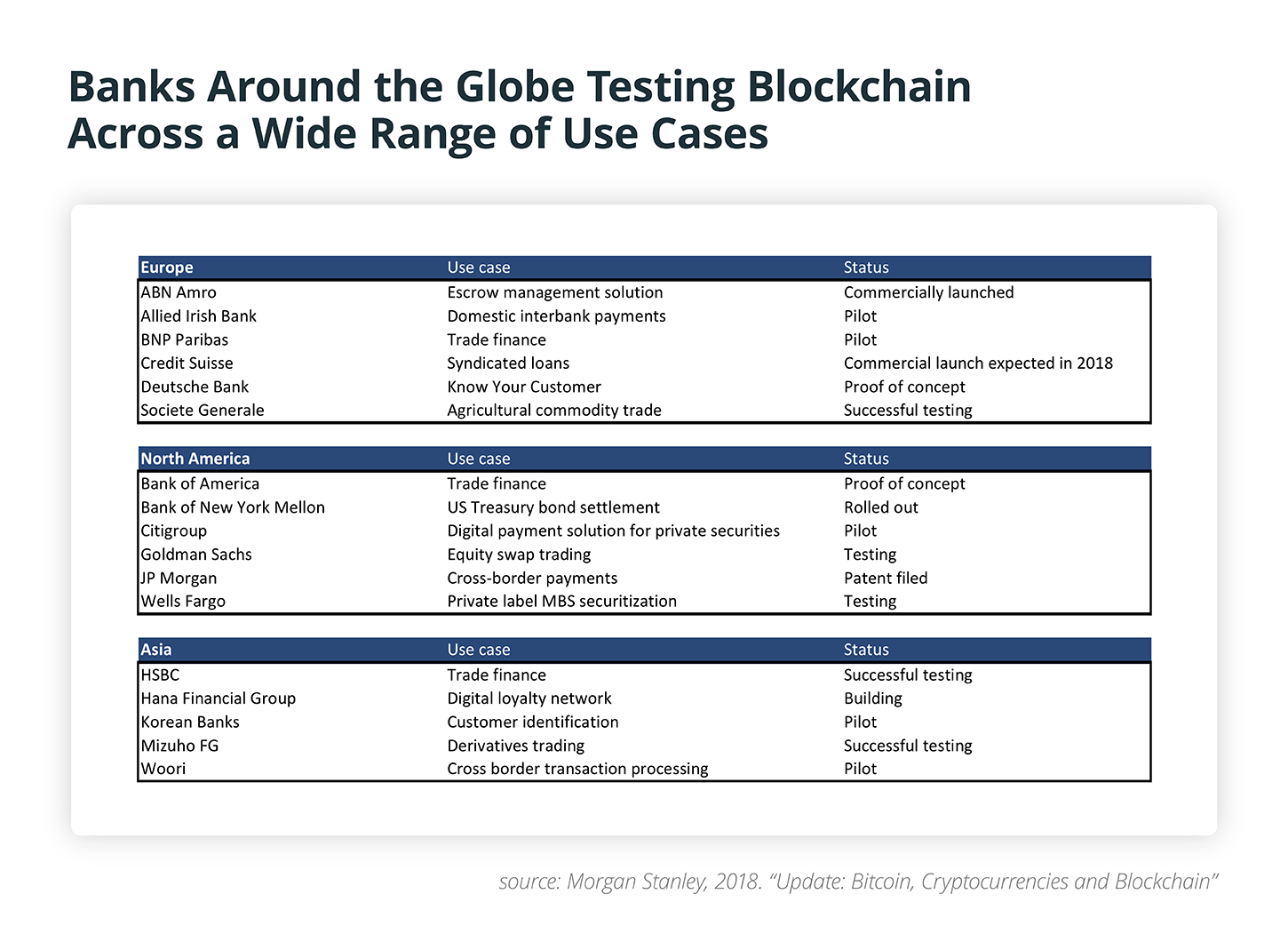 Researchers also provided examples of key infrastructure use cases of blockchain, in particular for banks: 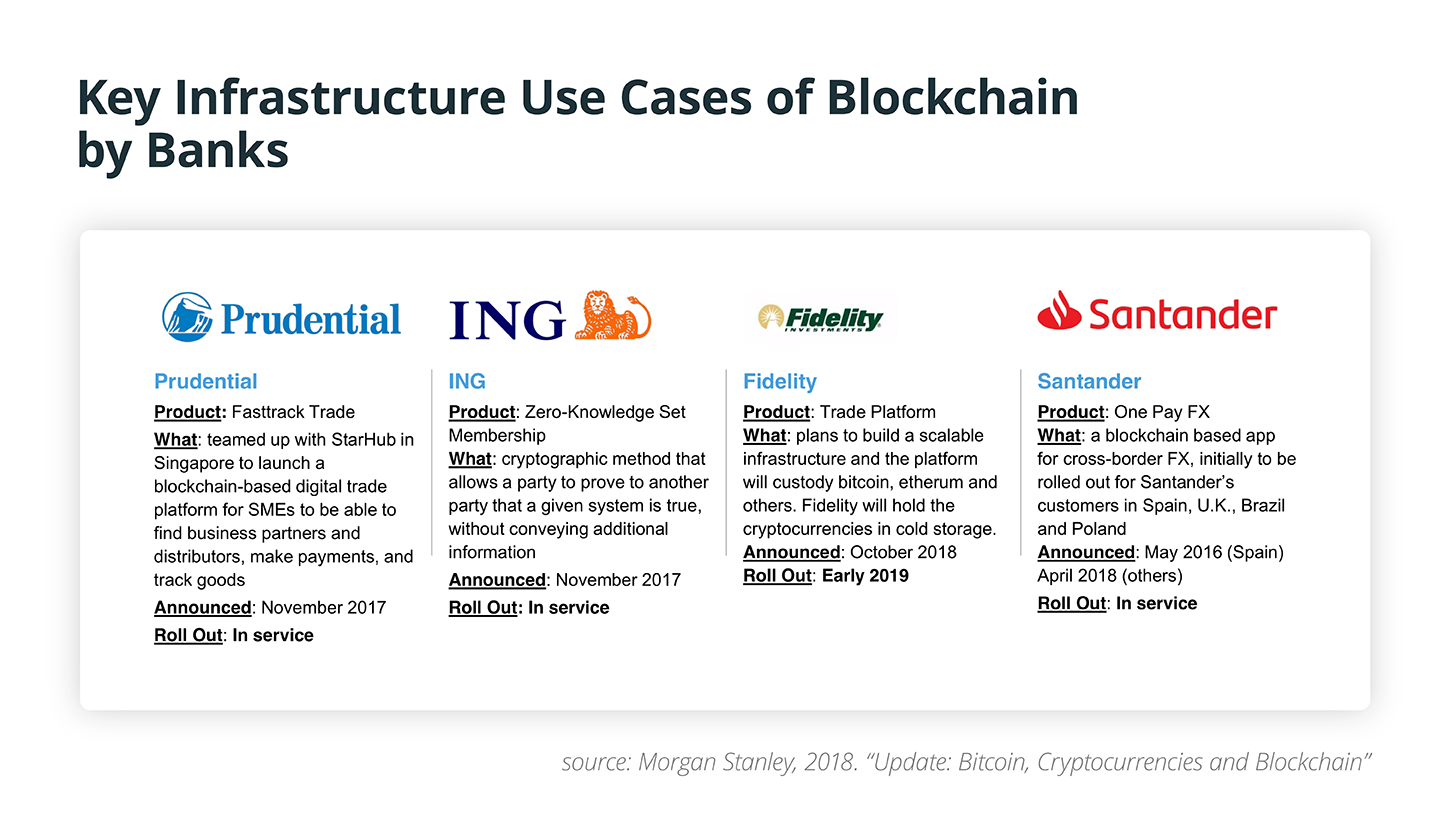 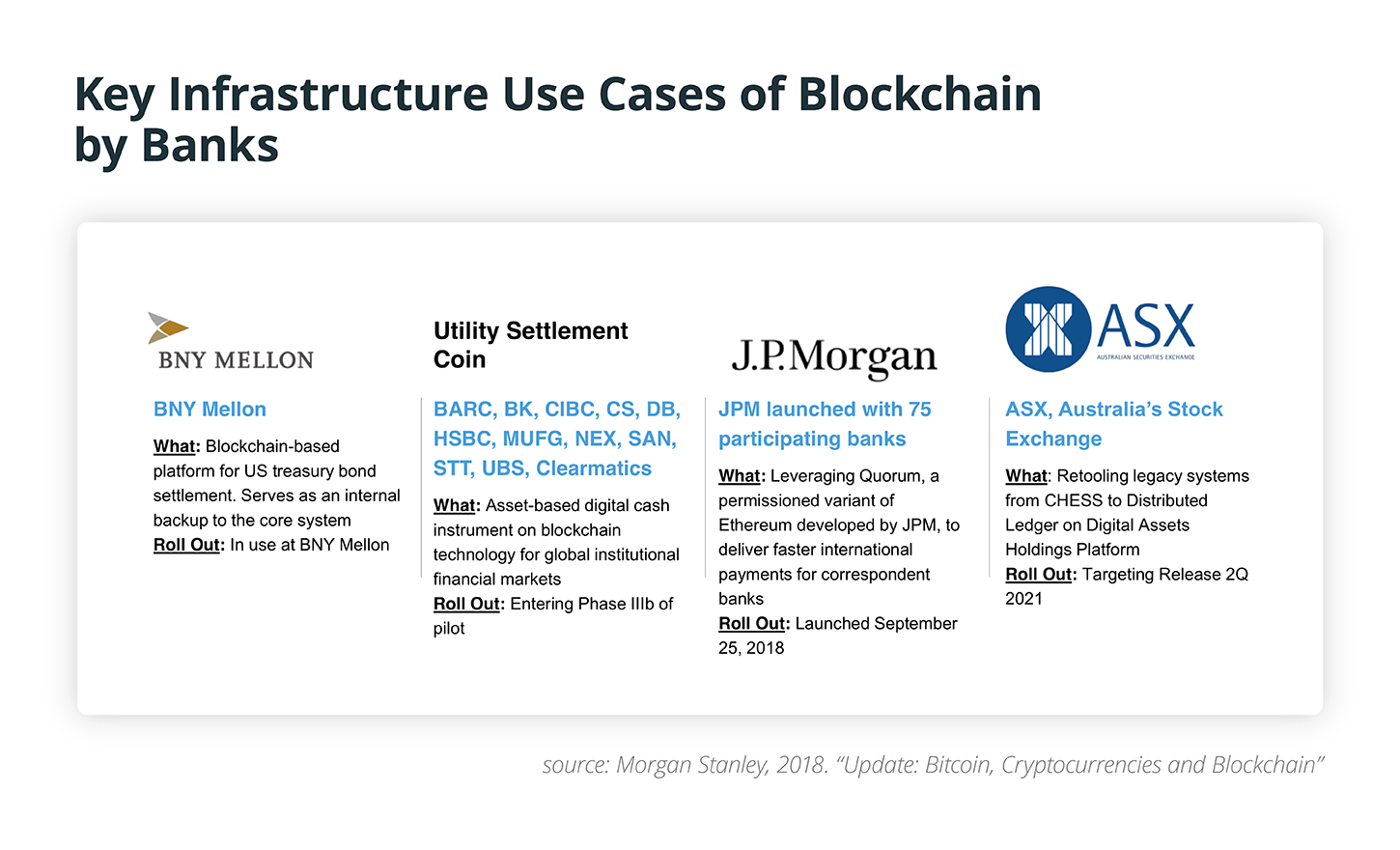 Although the report represents a significant change in both Morgan Stanley’s attitude as well as in other major financial institutions, it does highlight several areas where it remained apprehensive.

The report touches on one of the most commonly discussed drawbacks of blockchain and cryptocurrency: electricity use. Morgan Stanley analysts predict that the decline in mining equipment price will drive electricity use higher:

This latest graph builds on the same concerns highlighted in Morgan Stanley’s 2017 report: 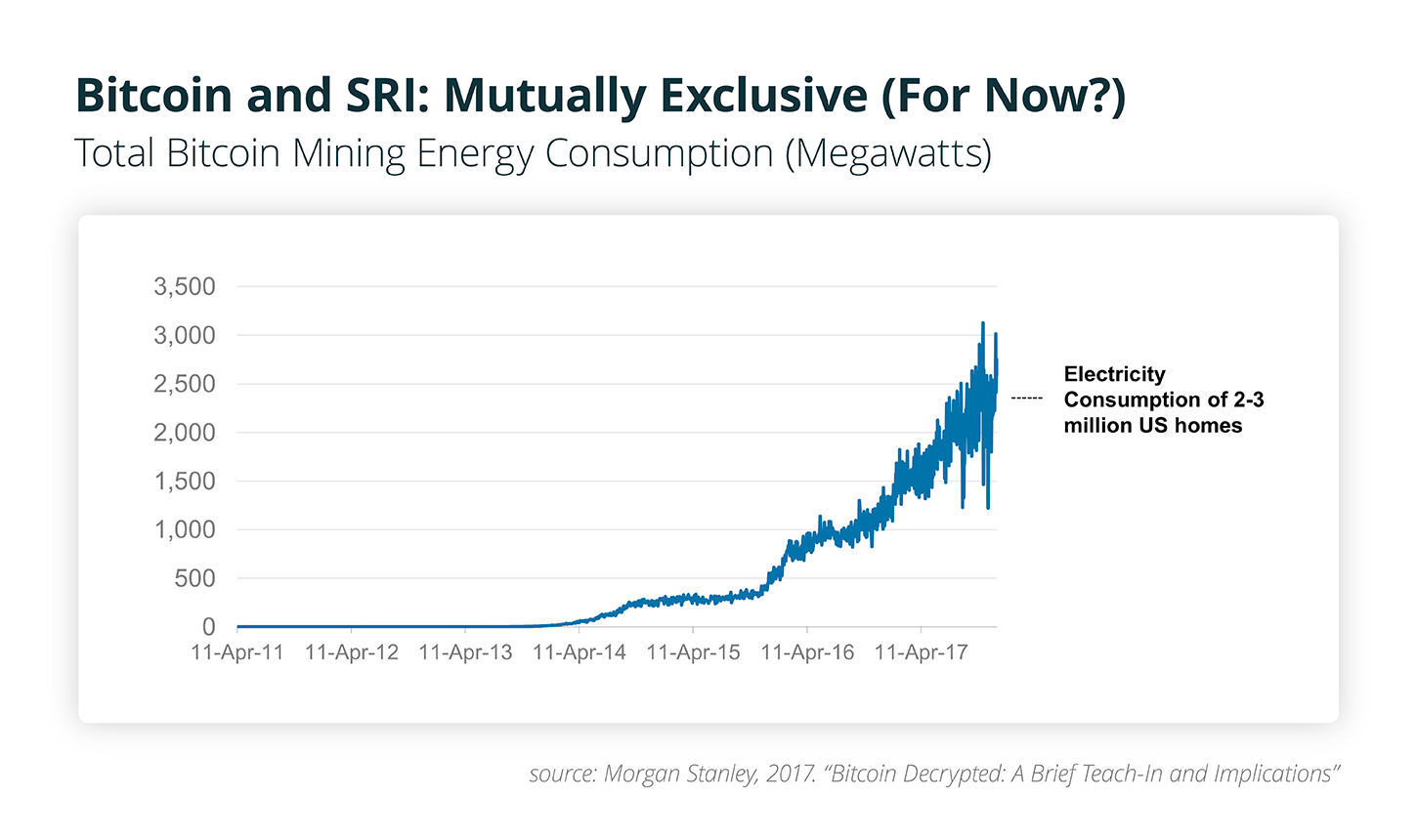 Bitcoin’s considerable energy usage has been widely reported. Earlier this year, Cointelegraph reported on how Bitcoin was both on track to use 0.5 percent of the world’s energy by the end of 2018 and face an impact to its profitability over electricity costs in the summer months.

Morgan Stanley issues warning over compatibility of AI and blockchain

The report dedicated an entire page to demonstrate the extent to which it believes AI and blockchain are “mortal enemies.” Curiously enough, the extent of their conviction did not stretch to providing any justification for this notion whatsoever: 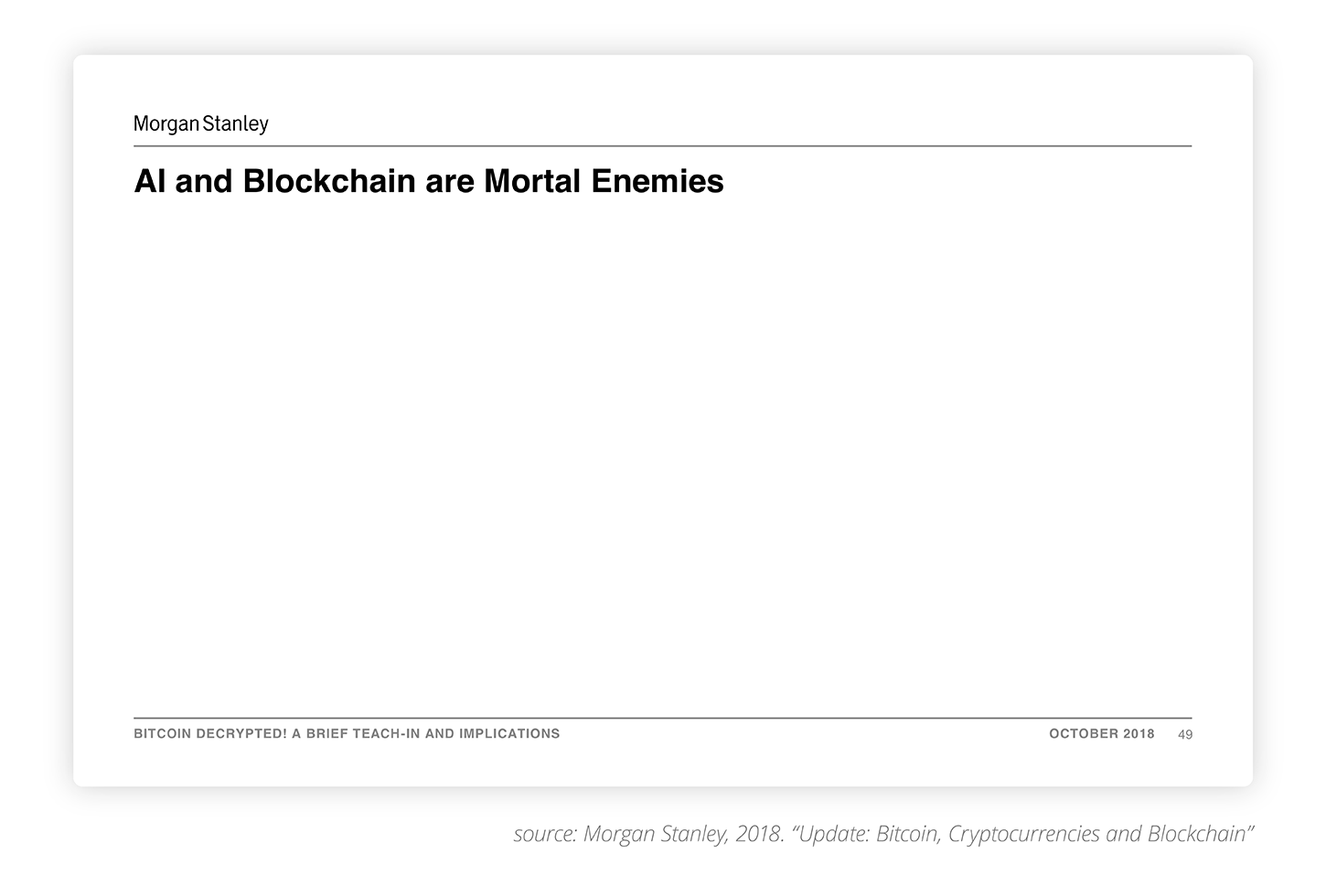 Morgan Stanley research on cryptocurrency is released on a regular basis. The bank’s previous report on crypto, entitled “Diversified Financials: Exploring global cryptocurrency regulations” was released on Aug. 21. The last report released by Morgan Stanley to focus on Bitcoin was released in January 2018. The November 2018 report is the first to document a change in institutional investment patterns and to document the trend for crypto-tied futures. The bullish outlook of the report could well be indicative of wider readiness for big institutional players to more readily adopt Bitcoin in the 2019 financial year.