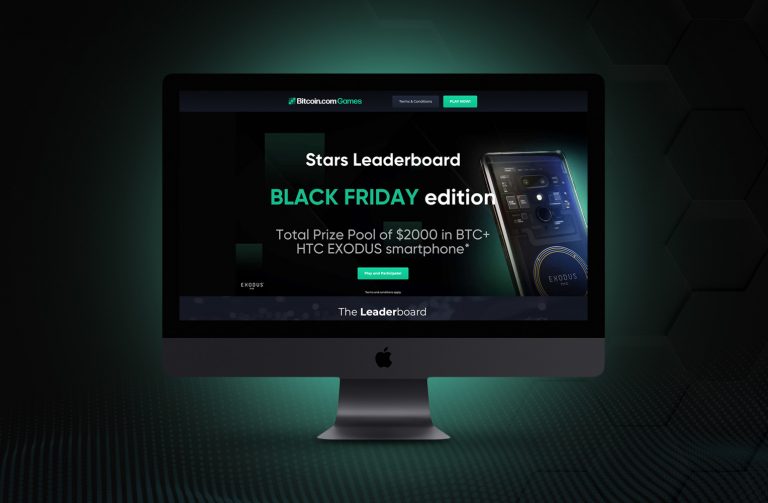 Bitcoin Games is now offering players to win some extra crypto and an HTC Exodus 1 smartphone, just in time for Black Friday. You can participate in the promotion by playing the site’s exclusive Slots, Roulette and Keno games, or any of the recently released slots and you stand a chance to win these prizes.

Also Read: Cash Games Adds Dozens of New Options for You to Play

Your Chance to Win a New Phone on Black Friday

Bitcoin.com’s very own gaming platform has increased the rewards for the ongoing Games Stars Leaderboard promotion to celebrate Black Friday. The prize pool for the top 10 places has now been doubled to $2,000 on each of the Bitcoin Games and Bitcoin Cash Games. The top three players on each leaderboard will also receive a brand new HTC Exodus 1 smartphone.

The head of Games commented: “Black Friday is when everyone is thinking about getting new electronics for a good price and what’s better than free?! So we are very happy to give an opportunity to all players to win an HTC Exodus 1.”

The Exodus 1 is a flagship smartphone from the Taiwanese consumer electronic developer HTC. The device’s killer feature for cryptocurrency users is the Zion Vault, a digital asset wallet with an easy-to-use software interface integrated with onboard hardware security. This secure built-in wallet has been capable of conducting bitcoin cash transactions since September 2019, so users can now easily buy, receive, spend and store BCH on the phone without the risk of remote hacking.

Please note that this new promotion is exclusive to Slots, Roulette, Keno, and the recently released new slot games. Check out the promotion pages for Bitcoin Games and Bitcoin Cash Games for the full terms and conditions that apply to the offer.

Bitcoin.com’s online gaming platform has recently been releasing a whole range of new games, thanks to successful partnerships with leading companies in the industry. More than 50 new options have been added to the roster since early October, with even more on the way.

The recently released games have been developed by popular providers from the online gaming industry such as Bgaming, Belatra, and Mr. Slotty. Many of the new options are based on game mechanics from that very popular casino attraction — the slot machine. The platform also offers a diverse range of other fun-to-play games and even has a stylized minesweeper for players to wager on.

What do you think about the Black Friday promotion from Bitcoin Games? Share your thoughts in the comments section below.

Verify and track bitcoin cash transactions on our BCH Block Explorer, the best of its kind anywhere in the world. Also, keep up with your holdings, BCH and other coins, on our market charts at Bitcoin.com Markets, another original and free service from Bitcoin.com.